Unified messaging simply means that you can read and reply to your messages from any device you happen to be using. You don’t have to stop writing a report on your laptop and pickup your phone to read & reply to messages. You should simply be able to reply from your laptop. Seems simple, right? However for most of us it doesn’t always quite work that way.

Why is unified text messaging so important? Texting is universal. It’s like email. SMS and MMS is a global standard that works with every modern phone everywhere. All you need is someone’s phone number to get in touch with them. There’s no sending a friend request and waiting for acceptance to contact someone. There’s no grandma doesn’t know how to use Facebook and accept my friend request so we can video chat on Messenger.

iOS (Apple) has iMessage which works great syncing messages within the Apple ecosystem. If one of your devices isn’t made by Apple you’re out of luck using it to text. There is no good reason iMessage cannot be baked into the iCloud website just like all of Apple’s other services.

Android (Google) had Hangouts with SMS integration that synced to all your Hangouts clients (Gmail, Hangout App on your tablet, Chrome extension, or the plain old website) but scrapped the integration in favor of launching the Google Messenger app which is a standalone SMS client. Color me confused.

Mighty Text and Push Bullet are 3rd party apps on Android which help you sync messages between your computers/tablets and phone. Both apps are good but both randomly decide not to work from time to time.

text sync to Windows Phone and Android users in a future update.  That could be interesting.

When your forced to use 3rd party apps like Mighty Text to get texts from your phone to your computer it’s yet another party who can view your texts and yet another server that could be hacked and expose your messages to the world.

Using apps like Facebook Messenger, WhatsApp, Snap Chat, etc are walled gardens of their own. You may be able to read the messages on your phone and a website but not everyone uses every service. You have no control over their storage or message retention policy; some services make it nearly impossible to completely remove a message, other may lack sound security measures. If the service is free usually the product is the user i.e. some of your data be it demographics or your messages are being sold to 3rd parties for tracking and showing you the more relevant advertisements. The list goes on and on.

At the end of the day you wind up with 5 or 6 messaging apps installed just to talk to most of your friends. Not only are some of these apps pretty invasive (ahem, Facebook Messenger) they also slow down your phone. Each app uses memory, gobbles up storage space, and chips away at your battery life.

There is also the issue of each messaging app using data. Most people in the states have unlimited voice and text messaging but data is limited. If you use a service like iMessage to sync your texts it does use data but that’s mostly WiFi. You’re getting a tangible benefit for that data usage – the ability to read and reply to your messages on the device of your choosing. With the instant messaging apps like Whatsapp, Facebook Messenger, etc you’re burning data for no good reason – You could be using good old text messages which don’t use data.

For me, I’d be happy if I never had to install another messaging app on my phone. I would probably one app to message people overseas that isn’t covered on my texting plan.

My new carrier Verizon has a pretty awesome unified messaging system called Verizon Messages. Verizon puts out apps for iOS, Android, Fire OS (Kindle), Windows, and Mac in addition having your text messages on a website available from any web browser. I’m really surprised it’s not a upsell because it’s a great service and works flawlessly for the most part.

Is anyone else frustrated by the sheer volume of messaging apps that don’t solve any problems but just add confusion to the mix? 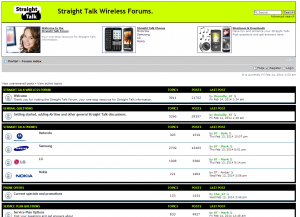 Apparently, Straight Talk has a company owned forum over at StraightTalkWirelessForum.com. I’ve come across it while Googling various Straight Talk issues and since it was using free forum software and is generally an eyesore I figured it was a 3rd party help site much like this one. After a little more reading I realized STWF is an official site. Urgh!

The funny things is most responses to questions are:

Hi <member>. My name is Straight Talk <name>. Sorry that you’re having a problem. I’m going to try to help you now. We need to take this issue offline, so I can address it further. I will contact you directly with a private message. Thank you.

The funnest thing is you can see the reps telling a member to make 5 posts in order to activate the private messaging service. In this case the forum administrator would be much better off allowing private messages for all registered members.

My guess is the rep gives the member the number to call customer service via private message. The same number they’ve already tried calling and with no results.

The idea of taking everything to private message flies in the face of what forums are about. You post a problem, someone posts a solution, and it’s out in the open for all to see. The next person that has the problem can find the thread and fix the problem on their own. Yes, certain information (phone, serial numbers, etc) should be conveyed via private message but for the most part solutions can and should be posted in the open.

You’ll have to excuse me I’m sort of a forum snob. I run quite a few forums and always use paid forum software. The feature set and the default look is leaps and bounds over the look of phpBB (the software STWF is running). Heck, there is even free software (ahem, myBB) that looks and runs much better than phpBB.

Seeing this abomination of a forum and lack of any clue what a forum is about almost makes me want to turn this site into a Straight Talk Help Forum.

Android models from Straight are only on the Sprint network as of Jan 2012 which means service is limited to areas that Sprint serves.

As an alternative consider one of the Nokia smart phonemodels. While not having all the Android flash and eye candy they’re quite capable smart phones.

Does my Straight Talk phone run on Verizon, AT&T, or Sprint?

There are also 6 month and 3 month unlimited plans available at a discount for bulk buying.

If you are anything like me you have tons of pictures on your phone that you would like to keep when you move to a new phone. Last week, I ordered a Nokia E5 from Straight Talk which will arrive here tomorrow. Since I’m transferring service from my current Samsung 404G to activate the new phone I’ll have no way to get pictures off my old phone.

I’m simply picturing messaging myself but instead of sending it to phone number I put my email address in the To: field of the picture message. When the new phone is activated I’ll just forward the messages back to that phone. Easy peasy.